Our cosmic neighborhood, the solar system, formed approximately 4.54 billion years ago with the birth of the Sun.

Stars are born in dense, gaseous regions called molecular clouds, which are cold enough for atoms to form molecules. Over time, one area within the molecular cloud will become slightly denser than others. This triggers the process of star formation, which spans millions of years. The denser area is called a “stellar nursery,” or dark nebula, and is opaque due to extremely high densities. Gravitational attraction will ultimately cause the dark nebula to collapse into an infant star, also known as a protostar. Protostars remain enveloped within their molecular cloud.

Later, stellar winds and radiation force the layers of gas and dust to clear while the star moves into the T-Tauri phase. During this phase a star is very hot and luminous but has not reached high enough temperatures to initiate nuclear fusion. Nuclear fusion is the process by which two or more atomic nuclei fuse together to form one heavier atom. T-Tauri stars are less than 10 million years old and typically have less than three solar masses.

If the star has gained sufficient mass, it will move into the main sequence phase, where its dense stellar core is sustained by nuclear fusion and held in a perfect balance of hydrostatic equilibrium. It is during this phase that a star fuses hydrogen into helium and begins nucleosynthesis — the production of nuclei heavier than hydrogen through fusion.

Through extensive data analysis and trial and error within computer simulated star systems, it is believed that planet formation is a byproduct of star formation. In this occurrence, outer material in the collapsing nebula does not make it into the forming star. Instead, this material forms a proto-planetary disk: a ring of debris in orbit around the star. Material within the proto-planetary disk is later accreted during planetary formation.

Terrestrial planets, which are rocky planets like Earth or Mars, form inside the frost line closer to their host star. Heavier rocky and metallic materials condense at higher temperatures than the icy compounds which primarily compose the second category of planets, Jovian planets. Closer to the star where terrestrial planets form, there is a lower abundance of material, hence generating less gravity, which results in their inability to form a large gaseous atmosphere.

Jovian planets, on the other hand, are composed of dense, icy cores surrounded by thick gaseous atmospheres, like Jupiter. There are traces of rock and metal within Jovian planets, but they are vastly outnumbered by the abundance of hydrogen compounds outside the frost line. The weight of a gas giant’s outer atmosphere causes very high pressures, which in turn creates extreme high temperatures.

Planet formation begins with planetesimals, which are 1–10 km diameter clumps of matter. Planetesimals grow through gradual accretion. Once they reach 100–1000km in diameter, they are considered protoplanets. Through the violent collisions of planetesimals and protoplanets over millions of years, planets are formed.

Newly formed planets are molten, much like magma. At such high temperatures, through a process called differentiation, lighter and denser materials are separated. This is what forms different layers within planetary bodies — both terrestrial and Jovian. The heaviest materials, such as metallic iron, sink to form dense cores, whereas low-density materials rise to form crusts. 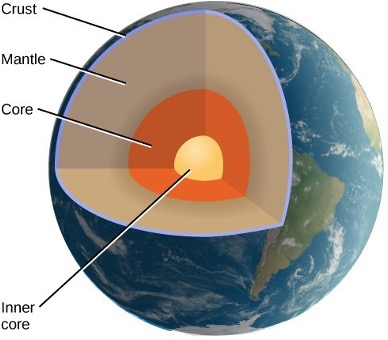 It’s believed that moon formation occurs alongside planet formation and star formation, just in a scaled down version. According to NASA, our moon formed 30–50 million years after the formation of the Solar System through the collision of Earth and a smaller planetary body.

However, today, it’s still unclear whether our own solar system is typical, and whether the processes of planetary, stellar, and moon formation are universal. Either way, studying the evolution of our solar system is the first clue of a much larger puzzle: our cosmic history.