An event every week that begins at 7:00 pm on Wednesday, repeating until February 24, 2021 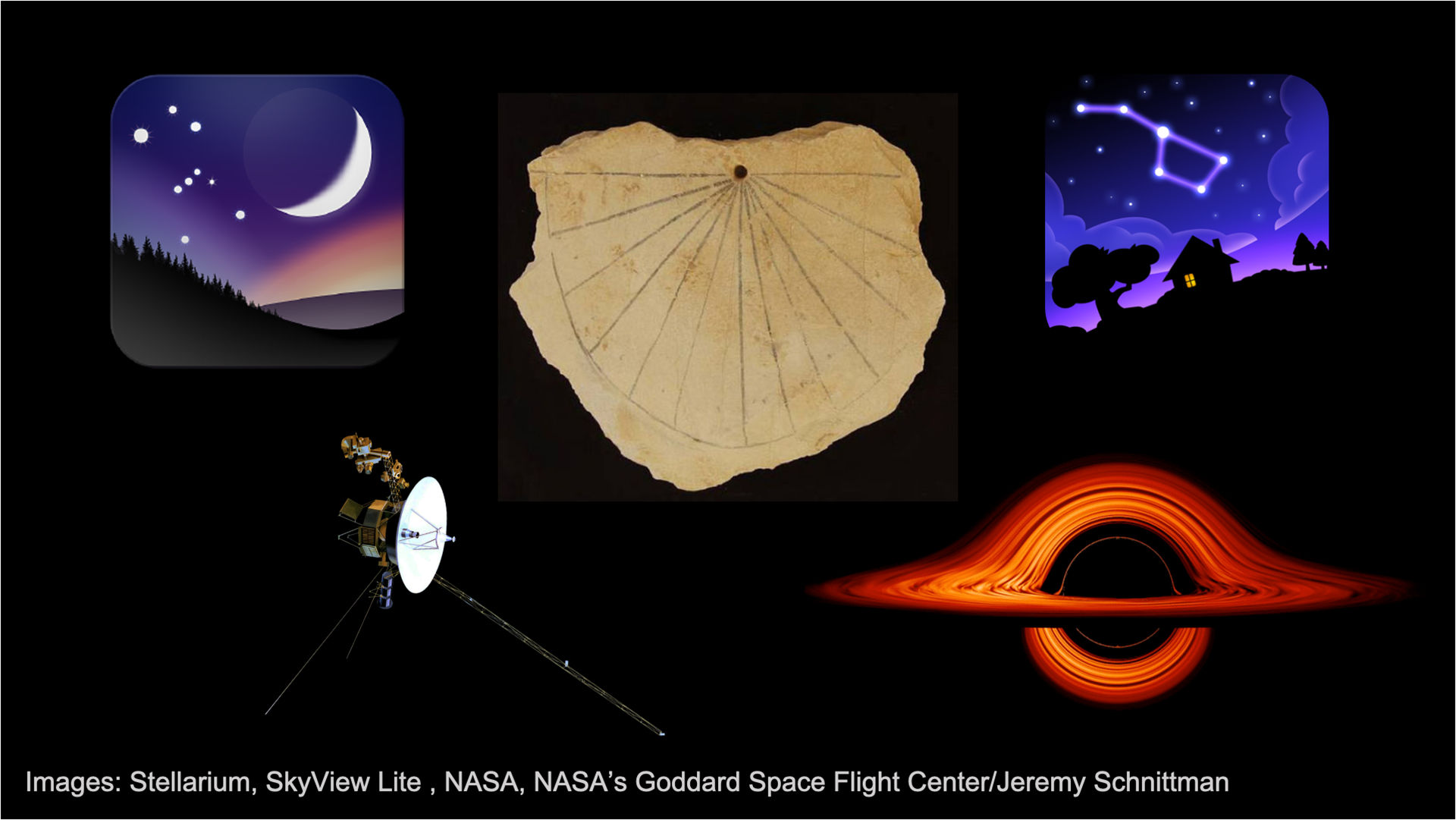 Sample from a smorgasbord of astronomy! Explore varied avenues of astronomy with this six-week course of one-off topics, from the mysteries of light and black holes, to sundial and space exploration, and ways your computer and smartphone become tools for observing and imaging the night sky.  As an astronomical taste-tester, you can expand your horizons and help shape future AAA class offerings.  This is one buffet that won’t break your New Year resolutions.

January 13 – Into the Unknown: The Voyager Interstellar Mission

Where is the edge of the solar system, and what is the nature of space beyond it? For two generations the Voyager 1 and 2 spacecrafts have been traveling away from Earth, towards interstellar space. Review their journey from launch to present, survey their milestones, and consider what lies ahead for these missions. This class is a precursor to the upcoming Current Missions course.

Instructor: In another time, Irene Pease shared views through her telescope with her fellow New Yorkers as their Friendly Neighborhood Astronomer, but currently hosts a weekly livestream tour of the night skies and local universe. She is producer of the Hayden Planetarium video blog, Skylight, a frequent presenter and co-host of Astronomy on Tap NYC, and the pilot of Hayden Planetarium’s Zeiss Mark IX Universarium. Irene has a degree in Physics from the University of Arizona, and currently teaches physics at York College and Yeshivah of Flatbush High School.

The simplest sundial is a vertical stick. Then it gets complicated with adjustments for a uniform scale, latitude, longitude within a time zone, daylight savings time, the sun’s analemma, and refraction. Elaborate ones give the date and the sun’s zodiac position. Clever sundials will be presented beyond the ubiquitous garden type, as well as scholarly texts, worldwide associations, vendors, and typical costs.

Instructor: David Kiefer holds various Masters degrees, including a M.S. in astronomy from the Center for Astrophysics and Supercomputing in Melbourne, Australia.  He has taught physics and astronomy at colleges in New York and New Jersey, and is presently a lecturer at City College, the Borough of Manhattan Community College, and Brooklyn College.  A member of the AAA, Mr. Kiefer observes regularly at Floyd Bennett Field in Brooklyn and at upstate sites.

Get to know your way around astronomy software, and its many uses: setting up and starting Stellarium; basic operations; using the various functions in the Left bar, Bottom bar, and Top Right bar; preparing for an observing session. You can download Stellarium for free at Stellarium.org.

Instructor: Matthias Schmitt is the Dark Sky Coordinator at Cedar Breaks National Monument, a silver tier IDA dark sky location in Utah. Having completed the Graduate Certificate of Science (Astronomy) Centre for Astrophysics & Supercomputing at Swinburne University in Melbourne, he continues to progress towards the Master of Science in astronomy. He produced the animated kids STEM TV show Space Racers and currently teaches astronomy to grades 8-10 at the Harlem Educational Activities Fund. Matthias loves public outreach with the AAA club of NY. His favorite observation objects of the outer sciences are eclipses, and he likes to explore the inner sciences through Buddhism.

While we all take light for granted, the quest to understand just exactly what light is, has engaged humans since the dawn of civilizations.  Today we understand that it possesses dual properties: acting both as a particle and a wave. This insight has enabled  astronomers  to better grasp  what comprises the universe we inhabit.  In this presentation, you will get an overview of  this duality and see how this knowledge has been harnessed to fashion instruments that allow the cosmos to reveal their secrets to us.

Instructor: Bob Marx has been a Physics teacher for upwards of 30 years,   He also ran  the Science Talent Search program ( formerly the Westinghouse and later Intel). That ultimately enabled  150 high school seniors  to submit research  projects. Among the multiple awards they received,  two students  went on to gain Rhodes Scholarships. Despite his “retirement” ,  he continues to teach Physics at Hunter College. He had originally been  tasked to revamp the entire lab program for the first year Physics students. Disrupted by the pandemic, Bob managed the conversion to an online virtual lab program on Zoom, currently in use.

Predicted by Einstein’s theory of general relativity, black holes were described mathematically before any observational evidence existed. Now scientists detect them indirectly using both light and gravitational waves. In this lesson we will explore the formation and nature of these unique astronomical objects. We will also examine instruments used in varying detection methods and explore current areas of black hole research.

Have you ever wanted to start astrophotography, but don’t have a camera? Ever wanted to capture the night sky with just your cell phone, but wasn’t sure where or how to start? With this course, you’ll learn the basics of “Astrocelltography” – astrophotography with your cell phone! Handheld or mounted, with or without a telescope, we’ll go over the tips and tricks to get you started. And there are more ways to get the most out of your smartphone as an observer. Explore some versatile apps, such as Heavens Above an ISS Finder, to help you plan and enhance your observing sessions.

Katherine Troche is a Brooklyn, NY native and operates under the moniker Kuiper Kat in New York, NY. Through volunteer initiatives, Katherine spends her time conducting astronomy-related outreach via social media, public observing (sidewalk astronomy), and for various organizations and institutions throughout the five boroughs. Katherine is a current Solar System Ambassador with NASA/JPL, volunteer astronomer at the Intrepid Sea, Air & Space Museum, guest presenter at the Poppenhusen Library in College Point, NY, and co-chair of the Amateur Astronomers Association of New York Observing Committee.

Faissal Halim has been stargazing since 2015. He began regularly attending AAA observing events in April 2016, and officially joined AAA a month later, just a few days before the Mercury Transit. He has since contributed articles to Eyepiece, served on several committees, and has been active with observing, and astrophotography, primarily with wide field landscape style photography. As a member of the club Faissal has appeared on NY1 Weather, and the documentary The Hottest August; and he provided technical advice for shooting a short sequence during a total eclipse for a short film, The HAFIZ Project. He is currently on the AAA Board of Directors.

Location: Classes will be online using Zoom. Sign-in with an ID code given to you the weekend before each class. Class recordings available during and for a time after.

Cost: $45 for all 6 classes, or $15 for a single class. Click the link on this page to register for all 6. To register for just one or two, select the titles above.