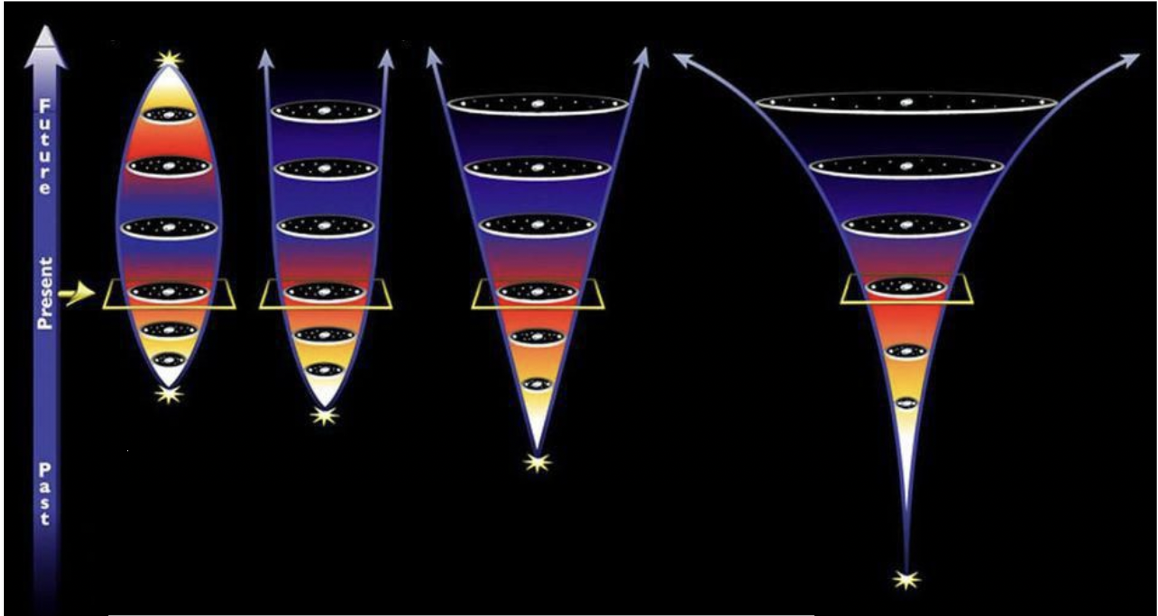 This is a new course that extends Cosmology 101: Basic Themes, but can be taken as a stand-alone cosmology course. The basics are always reviewed before further and emerging themes are discussed. Key brand-new topics are also presented. This course requires more than listening to lectures; it needs class participation to clarify, correct, comment upon, and extend the themes being addressed.

Cosmology is the study of big issues in astronomy, such as where did the universe come from, when, how, and what are its present and future conditions? Previously, cosmology questions and issues were only addressed by philosophy and religion. Now astrophysics investigates them and formulates intriguing, complex answers.

Before the course begins registrants receive its Zoom link and an “invitation” to officially join its Google Classroom in which downloads, syllabus, and correspondence are posted.

July 7: From the Big Bang to Today

Review of Big Bang essentials and evidences, and Hubble’s Law. The expansion rate and the age of the universe are further developed. A detailed look at the cosmic stages following the Big Bang, including the newer concept of inflation. Interpreting complex cosmology diagrams depicting the evolution of the universe. H(t) vs H0.

July 14: Expansion Rate and Size of the Universe

Units for masses, energy, density, distances, and time. Introduction to dimensional analysis. The all-important Friedman equation that governs the rates of expansion– past, present, future. Critical density and omega values. How the Hubble parameter, H(t), has changed during eras following the Big Bang. Current value for radius of the universe calculated. Getting H(t) from z(t).

July 21: The Ultimate Constituents of the Universe

Review of atoms, molecules, elements and their isotopes. The explosion of new particles beyond the proton, neutron, and electron creating a “zoo” of subatomic particles. Quark theory and QCD now central to the “Standard Model” of particles. Recent validation of the Higgs particle that establishes particle masses. Proposal to go to deeper constituents– string theory.

•Is the universe finely tuned?

August 4: WMAP and Planck Cornucopia on the CMBR

Review of the CMBR emitted during recombination 380,000 y after Big Bang when universe had a radius of 42 million lightyears. Extensive and detailed analysis on these images. For example, their granulation reflects standing acoustic waves in the infant universe forming clumps of known size and separation. Essential findings about our cosmos, including NASA’s top ten. Quantum fluctuations during the Big Bang were the seeds of today’s cosmic web of galaxies and clusters.

•Dark matter and dark energy. What are they, why invented, mapping of, and possible constituents for?

• On-going investigations on H0. Discrepancies in latest research and their significance.

• Is G really constant over time?

Location: Classes will be online using Zoom. You’ll receive the link when you register. Class recordings available during the course and for 4 weeks after.