Transits are some of my favorite celestial events to photograph.  Images of the ISS transiting the Moon or the Sun provide a unique perspective on the vast distances, incredible speeds, and enormous scales that pervade astrophotography and outer space.  This past August, I caught the International Space Station (ISS) transiting Jupiter.  Here’s some background on how the shot was set up.

Preparing for a transit shot involves planning around three key factors: when the transit will occur, from where will it be visible, and appropriate camera settings to capture it.

For this photograph, planning of the transit timing and viewing location was done via the website CalSky, which tracks a rich database of satellites and orbiting objects.  One great feature of CalSky is the ability to set periodic email alerts for when larger satellites may cross the Sun, the Moon, or transit other astronomical objects like bright stars and planets.  Currently I have CalSky set to send me an email alert every Friday listing any nearby occultations by the ISS, for the next 10 days.  It also indicates whether or not the ISS is illuminated during the transit, and the apparent magnitude if so.

Buried in an email alert during the first week of August, this particular transit caught my eye: both Jupiter and the ISS were forecast to be illuminated at about magnitude -2.1 and of similar apparent size (ISS at 30” of arc, Jupiter at 36”).  This coincidence meant that I might be able to find an exposure setting that would capture both targets without washing out either one.  The transit was forecast to occur around 9:12PM on Thursday, August 9, with the ISS and Jupiter at a moderate elevation of 22 degrees above the southwestern horizon. 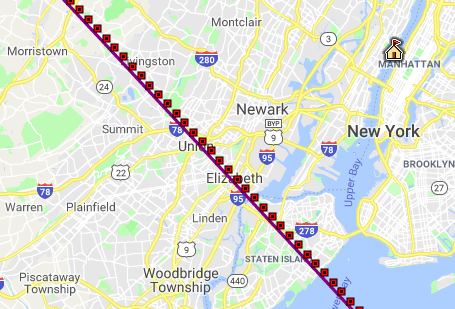 Every transit has a “corridor”, or path on the ground from which it is visible.  Observing from inside the corridor lets you observe the ISS crossing over the face of the object being occulted; outside the corridor you only see a near-miss.  CalSky provides a map of the transit corridor centerline, and the corridor width.  The width of the corridor is mostly determined by the size of the object being occulted.  For lunar and solar transits, an observer can be within two miles of the corridor centerline and still see the ISS cross at least some part of the ~31 arcminute disk.  For Jupiter at 36 arcseconds, the corridor was less than 300 meters wide!  That’s about the same as the distance between Manhattan avenues.  My task became finding an open space with southwestern views that was directly on the centerline.  I settled on a small park in Millburn, NJ, just northwest of Union.

With the transit forecast for 9:12:25PM, I arrived at the site around 8PM to set up.  My equipment was a Celestron C8N reflector sitting on an Orion Skyview Pro GEM with a right-ascension clock drive.  The shot would set Jupiter in the center of the frame, and hopefully catch the ISS zipping from one end of the field of view to the other.  Imaging was done with a ZWO ASI290MC camera at prime focus, attached via USB to a laptop running Firecapture.

Choosing camera settings was half art, half science.  Per a handy online field-of-view calculator, my camera and telescope combination would catch an area around Jupiter less than a third of a degree wide.  This is about the size of your smallest fingernail held at arm’s length.  The ISS would be moving at 27.1’ per second, zipping across the frame in less than a tick of the clock.  There would be no chance to adjust settings or for a do-over.  I presumed that I would need as short of an exposure as possible to catch any detail of the rapidly moving ISS, and prevent motion blurring.  Jupiter could serve as a stand-in point of reference for exposure settings at the same apparent magnitude as the ISS.  Simply put, I turned the camera gain up as high as it would go before the capture began getting visibly noisy, and then lowered the exposure time until Jupiter was registering at 60% on the preview histogram.  The trade-off was that little detail would be visible on Jupiter itself.  The resulting exposure time was 0.15ms per frame, with the camera recording a series of stills at about 30 frames per second.

Knowing when to hit the record button was easy, since for this occasion the ISS was illuminated for a long SW-to-SE pass at about 20-25 degrees above the horizon.  My heart leaped when I saw it zip across the laptop screen!  At last, all that remained to do was some gentle processing with PIPP to stabilize the image, create an animation, and edit a composite.

Here are the results: